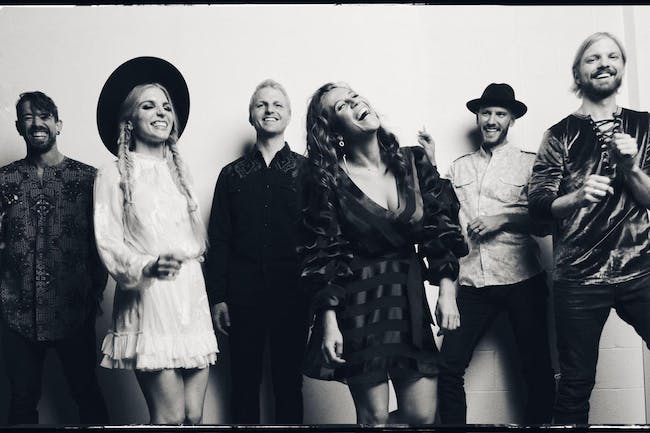 iCal
Google
This event has been cancelled. Please check your email for refund information.*

Delta Rae is a band of Southern storytellers. Started in 2009 in a house in the woods of Durham, NC, the six-piece features three siblings—Ian, Eric and Brittany Hölljes—and their childhood friend Liz Hopkins. In 2010 they rounded out the band with North Carolina natives, Mike McKee on drums and Grant Emerson on bass..They’ve been touring and telling stories through their music ever since.Full of the four-part harmonies that are quintessential to their sound, narrative-driven genres have consistently been at the core. Songs like “Bottom of the River”—a swampy Southern tale a of a witch’s revenge—live seamlessly alongside pop country ballads like “No Peace in Quiet” and “You Can Tell Him,” which speak of life after love lost.Now based in Nashville, the band has released two studio albums and four EPs with plans to release dual albums The Light and The Dark independently in 2020 and 2021

Frances Cone is an American indie pop band started in Brooklyn, New York and currently based in Nashville, Tennessee. The band consists of Christina Cone, Andrew Doherty, Adam Melchor, and Aaron Hamel. They are named after Christina's father and great-grandfather, both musicians themselves in South Carolina and both born on September 11. Frances Cone began in 2013 with the release of their first full-length album titled Come Back. In 2014, Frances Cone released a self-titled EP that streamed on Paste Magazine, which subsequently featured them in their "Best of What’s Next" series stating, "You’ll hear everything from folk inspired harmonies, to driving bass drums, to grungy synths, all culminating in an arena anthem, where Cone’s roof-lifting vocals shine."
Venue Information:
9:30 Club
815 V St. NW
Washington, DC, 20001