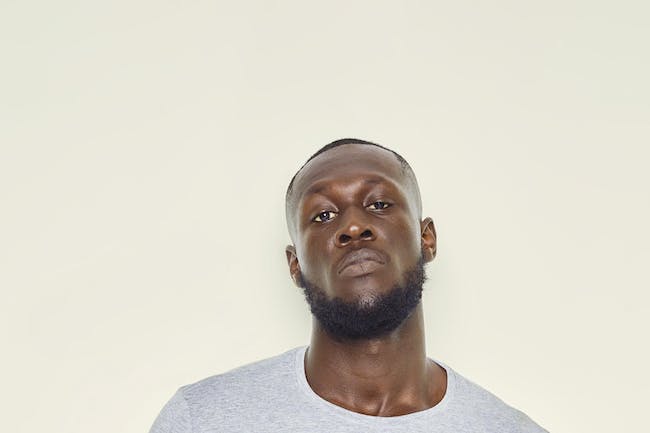 “I was meant to go to Oxford University,” laughs Stormzy, AKA The Problem, AKA Big Mike, AKA Stiff Chocolate. “I got the best grades at A-level, and the owner of my school was a governor at Oxford. He wanted me to go and it looked like it was going to happen. My mum thought I was going, my friends thought I was going. Then I started making videos and going on YouTube and stuff and...” his voice trails off, and then he grins and winks.

Stormzy might have traded off a first class education for a life on the music grind, but it’s not working out so bad. Since releasing his debut EP, Dreamers Disease, only two years ago, the 22 year old South London artist has scooped up two MOBOs, toured the world, won Best International Artist at the BET Awards, performed on Jools Holland, become the first unsigned rapper to feature on the BBC Sound Of... list, sold almost a million records, and made history by sending two grime freestyles into the UK chart top 20 for the first time in history. You only need to wind the clock back to March 2014, to find Stormzy tweeting a freestyle at Wiley and asking if he’d watch it – so how did young Michael Omari go from spitting bars in the school yard, to packing out venues from Camden to Japan, in just eighteen months?

“As a kid, my mum used to play Ghanaian hiplife, gospel and afrobeats,” says Stormzy, who grew up in Croydon, and while he insists he didn’t come from a ‘musicians household’, there were still tunes blaring out on the regular. “My sister used to play proper R&B slow jams, and that shaped my tastes quite a bit. They made me appreciate soulful sounds and songwriting. But the main music effect on me was external.”

Channel U launched on British TV in 2003, opening a window into the life and times of the growing UK urban scene, letting artists like Sway, Lethal Bizzle, Lady Sovereign and more beam into British living rooms. From secondary school onwards, aged eleven, it became an obsession of Stormzy’s and his mates. “We would download instrumentals off Limewire, and play them off our phones. We’d MC over them for fun. There was no dream of becoming a superstar. But you’d hope that one day you’d get on Channel U. The MCs on there, they were the stars for us.”

Stormzy had his own little crew, named DDB, and his first experiences of clashing came thick and fast. It was in these adolescent years that the themes, styles and swagger of the Stormzy you hear today were forged, the all out attack bars that mix cheeky, cocky and fiery in a formidable MC concoction. “I had proper clash bars back then. I got that style from an older MC called Charms. He was like my mentor and he used to spit like that. I clashed him once outside a youth club, and he schooled me.”

While most kids spent their spare time playing football in the street or knocking out ten levels on Tekken, Stormzy was clashing. He clashed anyone and everyone. “There was a place called Rap Academy in my area. They had decks and there would be instrumentals playing all the time, and I’d just hog the mic all night and spit. I remember once, three guys walked in, and they were way older than us. I decided to clash them, and it turned into three versus one. I was ripping them, cussing their mums and all sorts of stuff. One guy got pissed, and it all got a bit messy.”

Music at this point was just a hobby though, something he did with his mates. He was a one man band, doing his own promotion and taking his own bookings (“I would reply in the third person”). But, aged 20, he decided to make the leap, and do music for real. He launched a YouTube freestyle series titled “Wicked Skengman” in late 2013, in which he would spit over classic grime beats and put the videos online. A debut EP, Dreamers Disease, soon followed in 2014, showcasing a range of styles that epitomised his artistic open mind. “Forever” was a forlorn R&B track, not unlike the slow jams his sister had blasted in his youth, and “Jupa” was a bashful afrobeat song. The EP also contained “Stormtrooper”, one of his most conscious tracks to date, the lyrics of which trace a tale of salvation via the harsh realities of domestic abuse. “I wanted to show I could do big R&B records, big afrobeat records, and deep ones too,” says Stormzy. “I wanted to get all those sounds out of me, and show I’m not just grime.”

The promise on Dreamers Disease was enough to win him a shock invite onto the British music television institution that is Later With Jools Holland. “That was the most nerve-wracking thing I’ve ever done,” explains Stormzy. “We had rehearsals. We did four. I messed up every single one. Then came the live bit, and I had to get it right. I was thinking in my head, ‘Get it right, or you’re fucked.’ And we did it. The adrenaline got us through. Once I’m spitting, I’m gunning.” In tribute to those Channel U dreams, he wore a skeng hat, an Adidas tracksuit, and beamed the downright nastiness of “Not That Deep” into an unsuspecting nation’s living rooms.

Stormzy’s rise in 2014 might not have been an exclusively grime flavoured one, but when placed alongside his freestyles and remixes, it was enough to win him Best Grime Act at the 2014 MOBOs just a week after his Jools performance. “That first MOBO was the happiest moment of my life. But I also knew we needed to keep it moving, and keep doing what I do.” That same week, Wiley, the godfather of the UK scene, labelled Stormzy “the #1 grime don”, concluding, “Please take it where we couldn’t my brother.”

Going into 2015, Stormzy was sitting pretty as one of the most hyped MCs of the past decade, raking in plaudits with no label support, no radio support and a team made up of his close friends and family. 2015 started exactly how 2014 had finished, as he became the first ever unsigned rapper to make the BBC Sound of... shortlist. And that was quickly followed by an invite from Kanye to join him onstage at the Brit Awards.

“By this point,” begins Stormzy, “it was overwhelming. It was thing after thing after thing. I’m just this kid who could spit, who had put out a couple tracks and was on his way up. Now I’m standing next to all these major label acts. I thought, ‘Rah, this is mad.’ These people had become my peers but also my competition. I needed to outsell Years and Years or grab a Brit from James Bay. It wasn’t just about my rival MCs anymore.”

After hearing the Z.Dot instrumental on Wiley’s “BMO Field” , and realising he needed to put a track out with all this newbuzz, Stormzy went into the studio and recorded a frenetic grime number what would become “Know Me From”, a song jammed with lyrics that had appeared in a few freestyles previous, most notably: “Peng tings on my Whatsapp and my iPhone too”. The track hit BBC Radio 1Xtra hard, and Stormzy’s team, by this point known as Team #Merky, decided to make a video.

“All eyes were on me and I thought I should make a proper glossy studio video. But it wasn’t very me. We decided, let’s just hit the road and shoot a video and make it as fun and stupid as possible. We acted out each line, got my mum in it, got the Adidas creps in it.” It’s a DIY aesthetic that has informed almost all of Stormzy’s visuals since, from the subsequent “Wicked Skengman” freestyles, to the video for “Shut Up”. The only notable difference is that the crowd around him keeps growing and growing, to almost a carpark full in “Wicked Skengman 4”.

Despite their DIY feel, both “Shut Up” and “Wicked Skengman 4” both went on to chart in the UK top twenty – the former beating that year’s X Factor Christmas single – breaking records as they went and transforming Stormzy from a rising star to young king. “My freestyles always seem to do well,” he explains. “Aside from my songs, they have become the gold of what I do.” He finished 2015 with his own show on Apple Radio, aptly titled #Merky, making him the youngest presenter on the roster, alongside names like Pharrell Williams, Dr Dre, Ezra Koenig and more.

Now Stormzy is focusing on writing his debut album. It hasn’t stopped him from dropping a few surprise tracks here and there, like “Standard”, “One Take” and a verse on Chipmunk’s “Hear Dis”. But, as he says,

“Sometimes I just need to say something right now. Things I wanted to get it off my chest. No matter what campaign I’m on, I always want to be able to drop a track whenever I want.”

For many who only know Stormzy as the six foot MC who spits fire on YouTube, the debut album may come as something of a pleasant eye opener. He’s immersed himself fully in the craft of songwriting and production, gleaned from those years of growing up on slow jams. Twelve tracks of grime this ain’t.

“I’m not always going to draw the emotions, soul, feelings and sounds that I want to convey, exclusively via grime,” explains Stormzy. “As a human, I feel a lot of different emotions. Yeah, I want to make a record that my mandem can play in the car and get gassed to. But I also want to make a record for the quieter times, when you’re alone with your thoughts. To make a record like that, you need different sounds and styles. Sometimes I’m pissed off, and it will come via grime. But sometimes I feel loving, and it will come out a different way.”

In just two years, the cocksure Croydon MC has defied all expectations, not only of what a grime artist can achieve, but of what a completely independent artist from the streets of South London can achieve. Later this year, he’ll even make his big screen debut, starring in Brotherhood, the final instalment of Noel Clarke’s movie trilogy. His mum might still think about what could have happened if he’d gone to Oxford, but when he’s getting invited back there to give talks about his DIY music career, like Stormzy was on March 7th, then who needs first class education dreams?

“For some people where I come from, what I’ve done is already unbelievable,” says Stormzy. “But we can all do it if we focus and cut out all the bullshit. You can go on the be something when all odds are against you. You can do it quick, and effectively. Just make your mark and step in the game.”