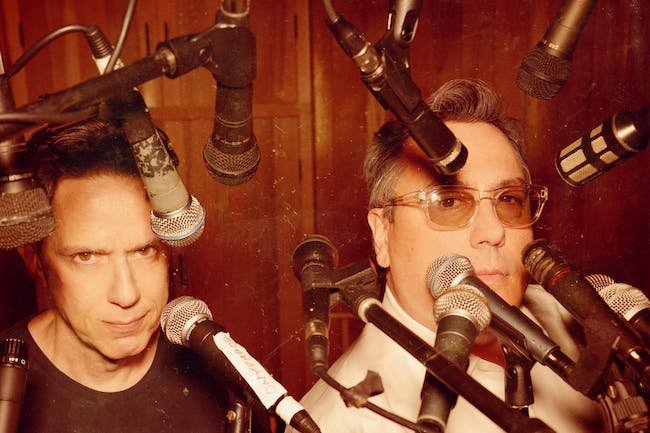 THEY MIGHT BE GIANTS PRESENT 30th ANNIVERSARY FLOOD SHOW

In honor of the album that made them an international act, They Might Be Giants is celebrating Flood's 30th anniversary in 2020 by performing the album, in its entirety, on stages in select cities across the US. The show is "an evening with" and TMBG will play two full sets with their barnstorming live band featuring the show-stopping Curt Ramm on trumpet. How will it be presented? In sequence, in reverse sequence, alphabetical, or mixed into additional repertoire? It could be different on any given night. But, in addition to Flood, the song selection in the “evening with” show will span the band's entire career from early favorites to brand new tracks, as well as the live improvisations that have become a highlight of TMBG shows.

Before Alternative Rock, when rock dinosaurs still roamed the earth, They Might Be Giants crawled out of the primordial performance art scene of the Lower East Side and on to the college rock scene with a series of breakthrough songs and best-selling albums. Vaulted into the national scene by a series of highly creative videos, the band ultimately garnered the attention of the powerhouse major-label Elektra Entertainment. Collaborating with British hit-makers Clive Langer and Alan Winstanley, as well as emerging indie engineers Roger Moutenot and Patrick Dillett, the band embarked on an album that would leave their lo-fi roots behind in exchange for a sonic adventure to be called Flood. Embraced by critics and audiences alike, the 19-song album would go on to go platinum and garner a clutch of timeless favorites for the band including "Birdhouse in Your Soul," "Your Racist Friend," "Istanbul (Not Constantinople)," "Particle Man," "Dead," and many others.

In August, TMBG offered up a special limited edition benefit t-shirt with 100% of profits going to RAICES, a Texas legal team aiding separated families and detained minors seeking asylum in the US. Over the course of a wild month, the TMBG fan community raised $60,000. In the last days of the fundraiser, John Flansburgh accidentally auto-filled an email address meant for a Jeff on the band’s road crew with Jeff Lawson, the founder of Twilio, who had hosted the band at a company event a few years back. Jeff mentioned he was encouraged by the band’s effort to raise money to end this harrowing episode and he offered to match any funds raised by the band. This, in turn, led to a whole new wave of interest on social media, ultimately bringing the total money raised to $200,000. (Yes, the band raised $200,000 for a very good cause by selling t-shirts!)

They Might Be Giants have always been a little obsessed with death.

Over the course of their 30-plus year career, renowned college-pop experimentalists John Flansburgh and John Linnell have never shied away from joining the lyrically macabre with bold and often unusual instrumentation—whether it’s talking about being reincarnated as a bag of groceries on 1990’s Flood or having their remains shot out into space (and coming back as a ghost) on 2016’s Phone Power.

The duo’s 20th studio album, I Like Fun (arriving on January 19, 2018), is similarly—if not more so—interested in personal oblivion.

"At some point we realized we could call any They Might Be Giants record 'Deathtrip,' and it would be appropriate," jokes Flansburgh. "But it wouldn't be very welcoming.

“I think the truth is, as a band, and as writers, the mixed bag of writing melodic songs with dystopian content is a winning combination for us. I think it speaks more to the persuasive power of melody than it does to the inevitability of dystopian themes. Because ultimately, I think people find a lot of optimism in what we're singing about, even when it's relentlessly pessimistic."

“[Death is] a great topic,” concurs Linnell. “It never gets old, and there's a million different ways to talk about it. It's never lost its juice as far as I'm concerned. I love making up songs about death. It's not the only thing we write about, obviously, but I think it's the gift that keeps on giving.”

Take I Like Fun’s lead single: the harmonizing, mid-tempo “I Left My Body,” which contemplates what becomes of the mind after the body is finished living and likens death to a nondescript waiting room.

“There's a receptionist, but the receptionist isn't there,” says Linnell. “It has a slightly mysterious, we-don't-know-what's-happening quality that I liked, that's sort of bureaucratic.”

Written over the last year and designed by TMBG's longtime graphic collaborator Paul Sahre, I Like Fun is the result of Linnell and Flansburgh sending each other material from their respective residences in New York City and State. It also found the band in familiar territory: Reservoir Studios (formerly Skyline Studios) in New York City, where the duo once recorded their commercial breakout, Flood.

"[Skyline] has a lot of great memories for us,” says Flansburgh. “Last year our producer Pat Dillett and his partner Steve took over the space, brought it back, and in a bunch of ways made it even better. I know believing a studio has any kind of special power is believing in voodoo, but when the voodoo is working for you, that’s okay!"

"The idea that this album took about a year to make surprises me because I wouldn’t say we fussed over any particular track that much,” Flansburgh continues. “This album is kind of under-produced for us and certainly by 2017 standards. It’s more like a ‘60s psychedelic production with a featured sound or instrument, maybe a vocal double, but not a ton of overdubs or processing. For me, just being a little more confident to keep things simple keeps it all much fresher. We just made a lot of recordings and just took advantage of being able to pull the best set out of a much larger stack."

So, why call an album with such worrying titles as “Let’s Get This Over With,” the aforementioned “I Left My Body,” “An Insult To The Fact Checkers,” and “Push Back The Hands” I Like Fun?

According to Linnell, the title (which is also the name of a song on the record) felt right on a gut level. “I think it connects up with another album title from the recent past, which was Join Us, which was a very positive vibe,” he says. “It’s kind of refreshing in a way— not everything has to be snarky.”

“It’s funny because it’s a tautology—it’s obvious,” continues Linnell. “Of course everybody likes fun. That’s the definition of fun—it’s something you like. And yet there’s a nice simplicity to it. And it contrasts with a lot of the material on the album, which is complicated and challenging.”

Flansburgh also points out that the song for which the album takes its name is nowhere near as one-sided as it sounds: "The song itself is basically about waiting for your painkillers to arrive."

Then, there's the twinkly “Push Back the Hands,” which sighs with longing for a foregone time. “‘Push Back the Hands’ is sort of maybe about this wistful nostalgia—a false nostalgia, like there was a better time than now, and how do we get back there,” acknowledges Linnell.

Additionally, the apocalyptic “By The Time You Get This” contrasts the optimistic way we once imagined the future with today’s more fatalistic vision. “The narrator of the song is projecting all this stuff that is not correct about the future,” Linnell says. “Apparently there was this belief at the end of the 19th century, so I'm told, that people had a kind of Utopian vision of the future, that they had this notion that, by the end of the 19th Century, that maybe war and disease and all these things were going to be eradicated. Of course, they had no anticipation of the two world wars or the Holocaust or the atom bomb or any of this stuff that then happened. Nowadays, we have this more Blade Runner-y notion of what the future is like.”

Meanwhile, "An Insult To The Fact Checkers" is just a good old-fashioned kiss-off anthem (despite its politically relevant-sounding title). "I guess in our post-factual media environment, you might assume that it's political commentary," says Flansburgh. "But it's really just an 'I Hate You' song, in the proud tradition of 'I Hate You' songs. Everyone has had unreliable friends over the years, and it's really just about a friendship going sideways.”

Even album closer “Last Wave” leaves you with a pit in your stomach by, as Linnell points out, “reminding you of your darkest fears.”

“On an album with a fair share of death imagery we went a little overboard with this one, but perhaps the music is kind of uplifting,” he says.

Though They Might Be Giants have built a lengthy, successful career around blanketing perturbed themes with springy, experimental melodies, the one thing Linnell and Flansburgh remain assured about is their band’s future.

"There’s not a lot of job security in music,” acknowledges Flansburgh. “You see how quickly the best acts you’ve ever seen explode or implode and you come to realize every turn is really a chance to crash the project. Somehow we beat the odds.

“A long time ago The Onion had a piece spoofing the Behind the Music of They Might Be Giants and how disappointing it was that there was no sex or drugs,” he continues. “But maybe that’s not the worst strategy—don’t take drugs in public.