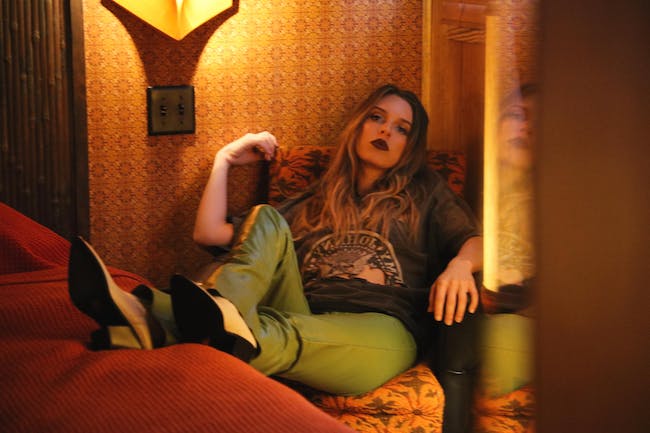 ZZ Ward didn’t have to look far for inspiration on her second full-length album, 2017’s The Storm. Equally evocative of blues grit and hip-hop bounce, the Los Angeles-based vocal powerhouse and multi-instrumentalist leapt forward by taking a deeper look at some of her earliest inspirations—including Howlin’ Wolf, Robert Johnson, Vera Ward Hall and Big Mama Thornton.

“For me, this album wasn’t really about experimenting,” she admits. “It was more about simplicity, honing in on what I love about music and what makes me who I am as an artist. Growing up, I listened to a lot of hip-hop and blues, and I love those two genres so much. Sometimes, to evolve you don’t need to go outside of yourself; you can reach further inside of yourself instead.”

It’s a realization earned over a whirlwind five years. The Fedora-rocking, guitar- shredding, harmonica-wielding blues siren peppered an old backporch musical recipe with hip-hop urgency and hashtaggable wisdom on her 2012 mixtape Eleven Roses. Followed by her full-length debut Til The Casket Drops yielded a veritable hit in the form of “Put The Gun Down.” The latter generated 7.4 million-plus Spotify streams and held strong in the Top 10 of AAA radio for 10 weeks as well as receiving over 100 high-profile licensing placements and syncs, including the feature film We're The Millers. Kendrick Lamar [“Cryin Wolf”] and Freddie Gibbs [“Criminal”] were quick to collaborate, while Rolling Stone, Guitar World, Elle, Interview Magazine, USA Today, NPR and more extolled her. She lit up the screen on Jimmy Kimmel LIVE!, Conan, Good Morning America, The Tonight Show, The View, and many others and practically set stages ablaze on tours with Eric Clapton, Gary Clark, Jr., and Fitz & The Tantrums and at Coachella, Bonnaroo, Firefly, and Made In America.

Coming off the road, she decided to open up more than ever before.

“All of my favorite artists would tell real stories,” she goes on. “I wanted to talk about similar things that were close to my heart. Every song became something I experienced. I’ve had my slew of disappointing relationships, times when I was pissed off, heart broken and times when I felt a false sense of euphoria. There are times when you struggle with yourself or with somebody else. I wanted to pour all of those emotions into my music, stay true to my roots, and tap into what inspired me in the first place.”

Capturing this vision, ZZ recorded around L.A. at different studios and at home over the course of 2015 and 2016. She re-teamed with previous collaborators such as Blended Babies [Chance the Rapper, Kid Cudi], Neff-U [Eminem, Dr Dre], Ludwig Goransson [Childish Gambino, Haim] and Michael Fitzpatrick of Fitz & The Tantrums in addition to Warren “Oak” Felder of Pop & Oak [Kehlani, Alicia Keys, Alessia Cara] for the first time. “It was all about getting that raw emotion,” she exclaims.

The first new single “The Deep” [feat. Joey Purp] emerged as a welcome surprise for fans, bottling the creative burst of confessional crooning and clever rap wordplay that defined Eleven Roses. A sample of The Charmels’ “As Long As I’ve Got You” draped in classic slide guitar scorches as ZZ sings, “Don’t know how much I can take, but I need it” before finger-snaps elevate the harmony. Kicking off 2017, W called it, “her most candid body of work yet,” and The Fader praised its “spectacular effect.”

"'The Deep' is about feeling trapped in a relationship that I knew was no good for me,” she sighs. “I met someone that made me lose control of myself. When I wrote the song, we noticed something really haunting about The Charmels' 'As Long As I've Got You,' and we just had to sample it. I thought Joey would be perfect to bring a fiery passion and flavor to the song."

Elsewhere on the record, she serves up a gospel-style plea on the stirring and stark “Help Me Mama.” “‘Help Me Mama’ is about my personal revelation that not everything in life is what it seems. Growing up I had expectations about what my relationships should be like with other people, the world and even myself. Realizing nothing would ever be perfect, I had to take control of my life and, unlike when I was a kid, Mama isn’t always going to be around to solve my problems.

Her booming delivery on “Cannonball” [featuring 2017 Grammy-Award winning blues artist Fantastic Negrito] belies a delicate admission of admittedly being used by someone to pass the time.

Meanwhile, “Domino” [feat. Michael Fitzpatrick of Fitz & The Tantrums] hits us right in the heart. “Fitz and I wrote this song about recurring relationships that we’d had in our pasts that left us feeling unsatisfied,” she adds. “I spent many sleepless nights feeling like there was something more out there for me. This song talks about the hopeless journey I faced trying to find the right person.”

In the end, The Storm represents ZZ at her core. “This album as a whole really reflects much of the internal and external conflict that I've experienced. I feel like I dug deeper into what means the most to me,” she leaves off. “I hope that my stories connect with people out there and help them know they aren’t alone in these struggles. That’s what I can give to the world. Storms come and storms pass, it's how you weather them that defines you and makes you stronger.”